Christopher James
JavaScript is disabled for your browser. Some features of this site may not work without it. 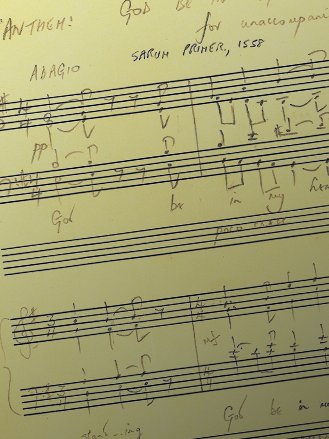 Christopher James (1952-2008) was born in Harare, Zimbabwe 1952. His father ran several farms in former Southern Rhodesia. Although he studied the clarinet and piano from a young age, on leaving school he entered a career in chartered accountancy. This career was short-lived and on turning twenty-one he embarked on a musical career. He immigrated to South Africa in 1974 to study music at the University of Pretoria where he studied composition with Stefans Grové and organ with Stephanus Zondagh. During these years he won a number of prizes and scholarships and in 1978 he obtained a teaching position in the Department of Musicology at the University of South Africa. After completing his Masters degree he was awarded a Fulbright Scholarship for doctoral studies in the United States of America. During the years 1983 to 1985 he furthered his studies at the University of Cincinnati where he studied composition, musicology and music theory with leading American teachers. During this period, much of his work was performed and some of it was broadcast on American public radio. Since his return to South Africa in 1985, he displayed a growing interest in African music. His doctoral dissertation, Images from Africa, was a choral symphony which made use of African poets. The music combined African melodic and rhythmic features with the contemporary European musical tradition. It was completed in 1987 and in 1989 Christopher James was awarded a Doctor of Musical Arts. James was the recipient of the Forte composition prize as well as the Roodepoort International Eisteddfod composition prize. In 1993-1994 he orchestrated the original version of Ushaka, and in recent years wrote two piano concertos and a symphonic poem, Paradise Regained. His most recent work is a four movement cello concerto.